We go beyond music

learn about the mofasa character

Mofasa Village is a village for believers, whereby we worship Our God with our service to humanity.  It strives towards serving communities by creating job opportunities and organising cultural events for God’s flock. Mofasa Village celebrates culture by promoting cultural, social and economic integration amongst countries through the manifestation of one’s essence. ​​​​​​​
Learn More 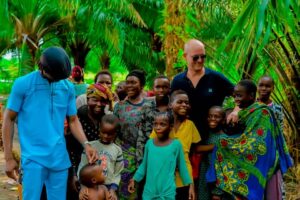 All Mofasa Village Festivals and events are family oriented, promoting music and cultures which are Godly and moralistically upright for the betterment of the society.

When Jahcub turned 20 years old, he formed his first sixteen-piece band in Lagos, Nigeria called ‘The Reggae Magicians’ which later became known as ‘The Chosenones’. Having learned from his father, as well as Fela Kuti and Majek Fashek, Jahcub later moved his band to London, England, where he assembled a 13-piece band which happened to be the only African band to play at the Queens’ Jubilee at the Beacon Festival in Oxford. As a diplomat with a British council and the British High Commission in Asia, India, Jahcub put together an 8-piece Chosenones band in Mumbai where they were given sole musical coverage of the Anish Kapoor exhibition in 2010, and also recorded in the Blue Frog studios. Back in Europe he decided to leave his diplomatic status to fully focus on the music, and recorded an album in Abbey Roads with Christian Wright and worked with great producers, such as Sodi in Paris (the producer of Fela and Femi Kuti).

​​​​​​​Jahcub Abraham, CEO Mofasa Productions (born in Nigeria and currently based in the Netherlands) has travelled over the years through different parts of the world to build a network for Gods flock. He has been to Spain, England, Denmark, Copenhagen, India and Zimbabwe, where he has established a base for Mofasa Village. The Journey so far